Last month, I sent out a survey to learn more about grade point averages at Olin. I received exactly 100 responses, split almost perfectly by sex (51 males and 49 female) and pretty evenly distributed by class. As for major, I received about 30 responses each for ECE and ME, 15 for E:C and less than 5 or 6 for every other major.

So, what did the data show? First, gender did not appear to matter. Males have an average of 3.583 while females have an average of 3.58. Things get a little more interesting when comparing the graduating classes. I expected younger classes to have higher GPAs, and as Figure 2 shows, this was true for everyone except females from the class of 2015 who have 3.65 average.

I also compared the average GPA for each major. Given the small sample size outside of ME, ECE and E:C, conclusions cannot be drawn about the other majors, but I included the graph anyway. Everyone I spoke to expected MEs to have a much lower GPA, but in the end ECEs, MEs and E:Cs were all within .03 of each other (ECE = 3.633, E:C = 3.614, ME = 3.603).

The last question on the survey was about sleep. Unfortunately (and fortunately), the vast majority of Oliners get 6-8 hours of sleep so I could not see a correlation between sleep and GPA.

Figure 1: In general younger classes had higher GPAs, but the females from class of 2015 deviated from the pattern.

Figure 2: Responses were evenly distributed across the classes surveyed. This shows the average GPA by class.

Figure 3: The average GPA for ECE, ME, and E:C was almost identical; the average differed by a mere 0.03 points. 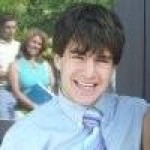